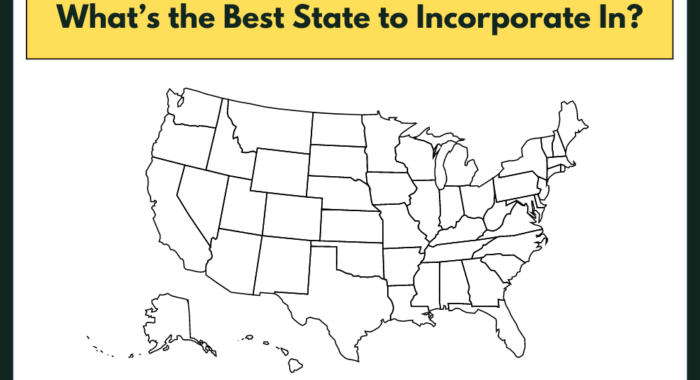 First, let’s assume you are forming an LLC not a corporation, because LLCs are the most common form of business governance due to the flexibility of that form. So, what are the tax considerations when choosing the State to form your LLC?

Of course, at the federal tax level, it does not matter what State you formed your company in. Federal income tax does not depend on the State where you company is domiciled. But many States follow the tax status that the IRS uses, so it’s good to consider how the IRS taxes LLCs. LLCs can be taxed as disregarded entities, or partnerships, or S-Corps, or C-Corps. Most startups choose any of the available forms of taxation except the C-Corp status. Those are pass-through taxation types. The company itself does not pay taxes, its profits are passed through to its owners, and the owners pay taxes on the company’s profits. That is also the way most States tax LLCs. That means, no matter which State your company is formed in, its owners will pay taxes to their home State and no income tax to the domicile state. It’s worth noting that even if you are forming a corporation, likely you will elect to have that corporation taxed as an S-Corp at the federal level. Again, that is a pass-through status. So, unless you are being taxed as a C-Corp, or you are considering a State that does require your LLC to pay some form of tax on the entity’s income, there is no reason to consider income taxes when selecting where to form your LLC (or corporation taxed an S-Corp).

Note: Some State and local jurisdictions do levy a gross receipts tax on the entity. This is generally relatively minor, usually much less than 1% of the company’s revenue annually.

Should you choose to incorporate your company in a State that has the cheapest initial cost you have to pay to the State? Not necessarily. For example, Delaware charges only $90 to form an LLC, which is one of the cheapest business formation fees, and Texas charges $300 to form a new LLC in that State. But it’s not necessarily a good idea to choose Delaware when you consider ongoing expenses. The annual Delaware franchise fee is a minimum of $300, but for Texas companies, you won’t pay any franchise fee to the State until your company reaches over $1.2 million in revenue. Your savings by choosing Delaware over Texas for the startup event would be wiped out after the first year in operation. Some States are deceptive with their filing fees. For example, both Maryland and Delaware list low initial filing fees ($100 and $90 respectively), but the basic fee just puts you in a queue that can result many weeks of waiting to get your LLC certificate. You must pay extra for “expedited service” in order to have your LLC formed in a reasonable time frame. So disregard initial filing fees as the primary consideration of what State to incorporate in.

Almost every State requires you to pay something to the State every year in order to maintain your registration in that State. In most States that annual maintenance fee is lower than the initial filing fee to form your LLC. But in some States, it can be much more expensive to maintain your registration than to form the company in the first place (California, District of Columbia, Delaware, and Maryland, for example).

Thus, by forming your company in a State where it does not do business and does not have a regular physical presence requires the expenses of annual maintenance and having a registered agent without any benefit (unless there is some other compelling reason to be registered in such a State).

Doing Business in a State

The Best State to Incorporate your LLC in Is…

All the observations so far should keep you from choosing to form your LLC in Delaware or Wyoming or some other exotic State, unless there is a compelling reason to do so. Then what is the best State to incorporate in?

This probably narrows down your choices to one or a few States. What if there is more than one State that fits in this category (i.e., where the company has an office or where your people must go to service customers)? Then you need a secondary good reason to select the best State for your company. In fact, you may choose to place your company’s principal office in another State precisely because of some secondary good reason. What are some of those good reasons.

The fact is that the difference in annual maintenance fees among the States is small (a few hundreds of dollars) relative to the annual revenues of even a modestly successful company. Is there a more compelling reason for your choice of State to incorporate in? There are two: State regulations and the court system. Your company may need to use the court system of its home State more often than any of the States in which it operates as a foreign entity. Although accessing the courts can be a rare event, when it does occur, convenience of the court system may be the definitive reason for choosing one State over another. Also, what is the reputation of the courts with respect to backlog and fairness? And finally, the oppressiveness of State regulations of businesses can play a role in your choice. You may choose to live in one State for reasons that are totally unrelated to the effects of that State’s governance on you as an individual but choose to locate your company’s office in a different State precisely because of that State’s more favorable regulation of businesses located there.

Therefore, for several reasons, you should probably form your business in the State where you plan to locate its principal office. So, for most business owners the best State to incorporate in will be the owner’s State of residence. But there are other considerations that are useful in the choice of State domicile, including the convenience and reputation of the court system as well as the regulatory environment in the possible States to choose from.