You already own a company called ABC, LLC and you’re thinking of starting another one, or you are going to buy another company. How should you structure the ownership of these two entities? There are a lot of options, and each one has its own advantages and disadvantages. This is Part 3 of a 3-part series on business ownership structure where we help you think through the issues. The previous parts in the series are at Part 1, and Part 2.

Say you own ABC, LLC in Fairfax, VA, and you have a proven formula of success. Some day you might want to franchise your business. But you know that Franchises operate under a massive regulatory burden, and you don’t want to invite that headache until you are certain that is exactly what you want to do. So for now you want to see if you can make the formula work in another city, let’s say Richmond, VA. Also driving this decision is the fact that ABC, LLC has a stellar manager that plans to move to Richmond, whether or not he keeps working for you. What is your best path to success in this situation?

Being somewhat conservative, you first establish a Richmond division of ABC, LLC, called ABC-Richmond (which you register as a trade name with the State, of course). This was the path we suggested in Part 1 of this series of articles. ABC pays to move its key manager to Richmond and pays the division’s expenses to set up operations, including establishing internal financial records for the division within ABC, LLC’s records.

All goes well for a time, and you’re confident that the new venture will succeed on its own. So you spin out the division as its own entity. This means that you establish a new LLC and call it ABC-Richmond, LLC, and you have the structure shown below. 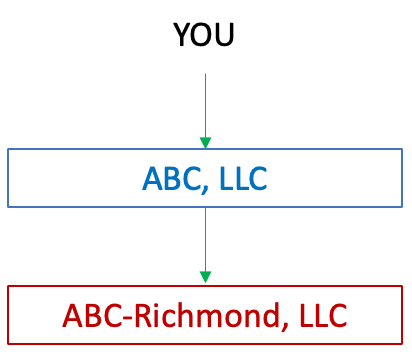 Simultaneously you draft agreement(s) to license ABC’s intellectual property (specifically it’s trademarks plus any copyrights, trade secrets and patents) to ABC-Richmond, LLC, and the subsidiary has everything it needs to replicate the original company’s success. 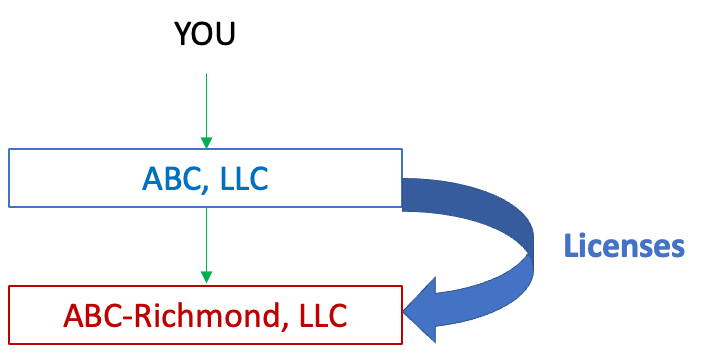 This structure puts the parent entity, ABC, LLC in complete control over the business operations of its subsidiary. But after a time, you will sell some ownership interest in ABC-Richmond, LLC to the key manager as an incentive to operate the Richmond company profitably. Now the structure looks like this diagram.

One more observation is relevant. If your plan is to spin off ABC-Richmond, LLC totally, why not start out by using the Separate Companies, Same Owner structure described in Part 2 of this series? 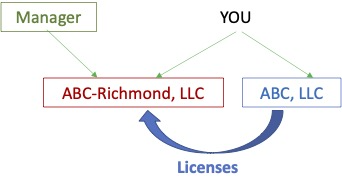 The answer to that question involves two main issues. The first issue is one of building value. The additional value to ABC, LLC under this structure is limited to the value of the royalties returned on the licenses, and does not include any ownership interest value. So you lose the flexibility of having the option of selling ABC, LLC together with its subsidiary.

The second issue is more subtle. It involves how control is exercised. Now the licenses that are provided by the company ABC, LLC should not come with control features that are exercised by the company. You, as part owner, must exercise that control over the operations of ABC-Richmond, LLC. If you are not careful in how you structure the relationship between the two companies, and the control over ABC-Richmond, LLC’s operations, the result may be that your partner, the Manager, complains that ABC-Richmond, LLC is a de facto franchise of ABC, LLC. You may have jumped directly into a franchise scenario instead taking baby steps towards that goal.

This concludes the 3-part overview series on structuring ownership of multiple companies. There are many details omitted for lack of space, and to keep you from glazing over totally. It is always prudent to consult your own attorney when you embark on the path of starting up or buying a company.

Entrepreneurs are going to save the world, and Argent Place Law wants to help. That’s why we are a team of entrepreneur-lawyers serving Entrepreneurs just like you. Think how great it will be to have a legal team with entrepreneurial experience on your speed dial so you can call us up and say, “I’m starting a new business line, should I put that into a separate LLC?” Call Argent Place Law to find out at 703-539-2518 or set an appointment today; your first 30 minutes are free!